Anti-gay "propaganda" laws in Russia have inspired everything from government crackdowns on Pride parades to hateful and violent attacks on members of that country's LGBT population. The attacks, including rape, humiliation, and torture, have been documented in photographs and on video for the world to see.


In February, the world will also witness as countries gather in Sochi, Russia to compete in the XXII Winter Olympics. While most LGBT people in the United States and around the world have been horrified by President Putin's "propaganda" law, there has been considerable debate over the most appropriate response, particularly when it comes to the Olympic games.

Two fantastic guests join Jim and his GSB regulars, Jason and Chris, in this special edition of Gay Sunday Brunch. Olympic Gold Medalist and outspoken advocate for LGBT equality Greg Louganis comes to brunch to offer his perspective on Olympic boycotts, and Isaac Casados shares his thoughts and talks about his popular No Sochi Campaign.

It's a discussion you don't want to miss, and you'll hear it ONLY on Gay Sunday Brunch. While you're here, be sure to find out more about Greg's efforts with AthleteAlly and the great work they're doing.

Of course, since it's brunch and the boys haven't been together for a while, they will do a 2013 year-end roundup of the top LGBT news—and Jason and Chris share some big news of their own.

Did we mention Jim gets Greg Louganis to talk about Tom Daley and his boyfriend? 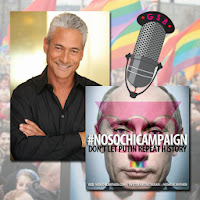 Ep. 7 What Will the Supreme Court Decide?


This past week, the Supreme Court of the United States (SCOTUS) heard arguments in landmark cases that will no doubt shape the face of LGBT equality. From the potential for sweeping decisions that declare all Americans are entitled to the rights and privileges, to the possible decision that the Defense of Marriage Act (DOMA) is unconstitutional, the conversations swirled from politics and equal rights to legal procedures and social media.

Does it sound a little confusing? Well it was. But to help boil it down, Jim talks to married couple Anthony Niedwiecki and Waymon Hudson. Waymon is one of the country’s leading LGBT activists and a regular blogger for Huffington Post, while Anthony just happens to be a law professor at John Marshall Law School in Chicago.

The three team up for one of the most illuminating, and often entertaining, discussions about the Supreme Court hearings you will find anywhere. Along with some pretty hilarious conversations about other top news, this is an episode you will want to share with your friends, family, and anyone else who cares about equality in America. Enjoy the show!


Darryl Stephens is a talented actor who is best known for his roles on Noah's Arc and the new hit series DTLA. But he's also a gifted writer, stage performer, singer, and songwriter. Jim sits down with Darryl to talk about his current play, "A Family Thing" (click here for tickets) and what acting on a stage brings him that films and television don't. The guys also play Darryl's song "Right Outside." It's all about obsession, lost love, and well, murder. Darryl also shares his thoughts on whether or not DTLA will be back for another season. It's a great chat you don't want to miss!

It's also been a HUGE week for LGBT news. We're thrilled our friend Waymon Hudson could join Jim this week to talk about some of the big (and funniest) gay headlines. As a political blogger, television host, and writer for Huffington Post, Waymon is one of the most informed, entertaining, and articulate voices for equality our community has. He's also got a wicked sense of humor—we know you'll love that!

Promote Your Page Too